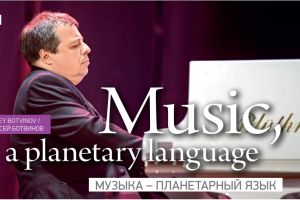 Destinations. Ukraine introduces one of the best pianists of our time, Odessa native Alexey Botvinov. Since 2014, every summer Alexey has been hosting the Odessa Classics International Music Festival in his native Odessa, whose popularity has been growing exponentially. Over five incomplete years, Odessa Classics has joined the major league of music festivals in Eastern Europe.

How did you get the idea of the Odessa Classics International Music Festival?
This project came to life in my native Odessa. Being an accomplished musician who successfully performed in 45 countries, I have this feeling of love for my country, for my city. For 25 years, I have been spending more time there than here, and I have seen the festival trend gain momentum. I've seen how important it is for music lovers, musicians, for the economy of cities, for the welfare of all, and for the image. Right in front of me, small European towns no-one knew about became the talk of the whole world in just five years. A festival is a unique tool. Especially now, when the world is experiencing a real festival boom. As a person who knows Odessa’s musical history well and knows that it is known in the world, it was clear to me that this is a very good capital, which would be a sin not to use. The best violin school in the world at the turn of the 20th and early 21st centuries is in Odessa. We have a great piano school. I have suggested to different authorities in Odessa for a long time to create a festival, offered help, offered to be its art director, but all the time they gave me the same answer: not now, not the right time... I did this for five or six years, and all the time it was no. And when 2014 happened, when everything was on the verge of collapse, I realized that in the near future I would definitely be told "no-no" ... And then I went bold (Smiles) and started doing it all on my own, relying on support from friends and businessmen I knew. We had a slow start, and then unexpectedly for me it all exploded and very successfully too. Already in the fourth year, we were recognized in Europe and included in the directories of top-level festivals. And this is a big success.
I took part in a huge number of top festivals and I know how it should be done. Therefore, I do everything up to the mark. Everyone notices this and spreads the word. Without exaggeration, our big-league event brings together superstars, real opinion leaders, who visit Ukraine for the first time to take part in our festival. Our project promotes the image of Odessa and Ukraine as a whole.

Let's talk more about 2019 Odessa Classics. Tell us about your collaboration with Switzerland in general. Based on your creative biography, you have a lot of connection with this country, including as far as plans for 2019 Odessa Classics are concerned.
Switzerland is my second home. When I was planning my festival, from the very beginning I was dreamed of inviting the Zurich Chamber Orchestra, which, in my opinion, is the world's best chamber orchestra, at least of the last decades. And a few years ago, it seemed like a difficult dream to fulfill. However, I came to realize my dream in just five years. The musical director of the Zurich Chamber Orchestra, legendary violinist Daniel Hope came to perform in Odessa as a soloist and we could negotiate in person. I am grateful to the embassy of Switzerland, with which we had a wonderful cooperation experience already at the fourth festival. Thanks to its support, we had the Swiss chamber band and Dimitri Ashkenazi, the son of legendary pianist Vladimir Ashkenazi. Dimitri is one of the best clarinetists in the world. Everything went very well. And after that we could talk about a large-scale project. I would like to emphasize that the Swiss diplomats understand the importance of cultural diplomacy.

You are a native of Odessa. You continue to combine performances as a soloist of the Odessa Philharmonic and the head of the Odessa Classics festival with tours around the world. You have long built yourself a reputation abroad, what keeps you in your homeland? What is the strongest magnet?
There are some unexplainable things. I love the city, the country in spite of ... I once tried to leave. It was in the early 1990s, I lived for more than a year in Düsseldorf, Germany. I thought I was there for good as it was much worse here than now. But soon I felt nostalgic in prosperous Europe, and it developed like a disease. (Smiles). I understood that part of me should be at home, and the other should travel, work as a free musician. But when I made the decision not to cut the roots, I returned to normal. I suppose nostalgia is a non-material thing, spiritual, difficult to explain, but very, very powerful. And I feel my mission is to do something for our country. And now, with the festival being such a success, I believe that maybe this is the thing that I should have done.

What would you advise foreigners who are just starting to live and work in Ukraine?
This is a country with enormous undervalued potential. There are some markers: absolutely all the big stars who performed with us noticed how many young people we have at concerts. We have more young people among classics lovers than, for example. in Europe. This is a tremendous advantage. Our young people are more seeking and spiritually driven than in the West. This speaks about the country's prospects. After 2014, there are a lot more active people who understand which path they should be taking, it's already present in their DNA.

SAVE THE DATE
One of the best music collectives in the world, Zurich Chamber Orchestra, is coming to Ukraine for the first time. The orchestra will perform on June 6, 7 and 8, 2019 at the Odessa Opera House and the Odessa Philharmonic and give an open-air concert at the famous Potemkin Stairs. The 2018 ODESSA CLASSICS open-air concert brought together over 10,000 listeners! Music director and legendary violinist Daniel Hope will perform together with the orchestra next summer!