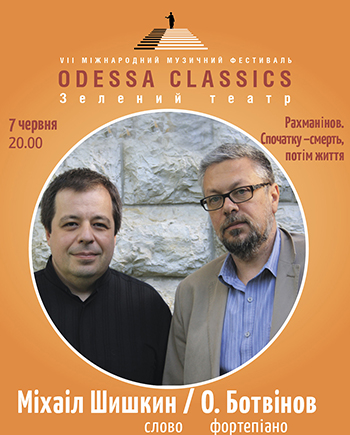 Special project of the Odessa Classics and the Green Theater

Mikhail Shishkin and Alexey Botvinov
An Evening of Music and Literature

An outstanding writer of our time Mikhail Shishkin was born in Moscow in 1961. He is an author of novels “One Night Befalls Us All” ("Larionov’s Reminiscenses”), “The Taking of Izmail”, “Maidenhair”, “Pismovnik (Letter Book)”, literary and historical guidebook “Russian Switzerland”. His journalism and numerous works in German language arouse great interest as well.
Shishkin has been awarded Russian Booker Prize (2000), the Russian Bestseller Award (2005), Big Book Prize (2006, 2010). Many theatrical figures appeal to Shishkin’s prose. Plays, based on his prose had a great success in Moscow “Petr Fomenko Theater”, Moscow Art Theater School (МХТ), in Moscow Open Theater “Most” and many others.
The writer has been living and working in Switzerland for many years already, where many great figures of Russian culture found themselves in forced immigration at the time. Among them was Sergei Rachmaninov.
Alexey Botvinov is widely regarded as one of the best interpreters of his music. In 2012 Alexey took a bold creative attempt to unite a novel by Mikhail Shishkin and works by Rachmaninow and Skryabin in a form of a theater performance. The play, as well as its further German-language version had well-deserved public acclaim.